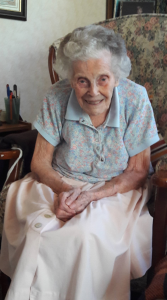 Dorset Advocacy’s memory recording project enables people with dementia to keep their precious memories forever. Advocate Sonya Threse has been working with dementia sufferer Joyce, to create a memory record; the story of Joyce’s life, which she can remember in vivid detail.

“I joined the RAF when I was 18,” she recalls. “I said I wouldn’t leave home until I got somewhere to live, a wage packet and a job. And then there was a big poster: Kitchener said …’we need you!’ And that’s when I joined the RAF and met my husband.”

The book helps when Joyce is upset or disoriented. Joyce said “It’s nice to be able to use the photos just to slowly … put it into focus”. The sessions with the advocate have been welcome break from daily life.

The memory record also gives her carers a better understanding of who Joyce is and what is important to her. This is particularly useful when it becomes less easy for a person with Dementia to communicate their feelings.

When we first met to write this article, Joyce spoke in short, polite sentences. She had difficulty answering questions, but as soon as she opened her memory record, Joyce suddenly became animated, recalling moments of her adventure-filled experiences –in vivid, humorous detail.  “We’ve left some pages blank, haven’t we?” says her daughter Carole. “We’ve got your hundredth birthday to look forward to.”  “You speak for yourself,” says Joyce. “I don’t look further than tomorrow.”